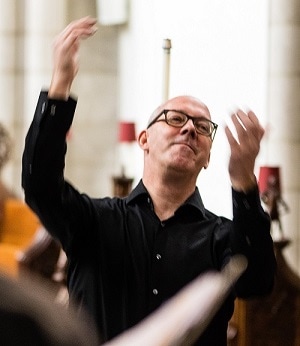 Following a nationwide search in 2013, Chris Shepard was appointed as CONCORA's Artistic Director after Richard Coffey’s 40 years in the position.  Shepard also serves as Music Director of the Worcester Chorus in Worcester, Massachusetts, and the Masterwork Chorus of New Jersey. His choirs have collaborated with a number of orchestras, such as the Juilliard Orchestra, the Orquestra Sinfónica Nacional de Mexico and the Hartford Symphony Orchestra, in venues that include Carnegie Hall, Lincoln Center and Radio City Music Hall in New York, as well as the Royal Festival Hall in London and the Palacio de Bellas Artes in Mexico City. Chris has prepared choirs for major international conductors, including Yannick Nézet-Séguin, Simone Young, Carlos Miguel Prieto and William Boughton, as well as for Broadway legend Patti Lupone and Ray Davies of the Kinks. He made his Carnegie Hall debut in 2015, and made his conducting debut with the New Haven Symphony in 2016.

Chris returned to America in 2008 after a dozen years in Sydney, Australia, where he founded the Sydneian Bach Choir and Orchestra. He led their BACH 2010, a project to perform all of Bach’s choral cantatas. Under his direction, the ensemble performed over eighty cantatas, as well as the two Passions, B Minor Mass, and Christmas Oratorio; they completed the cantata cycle in 2013. In addition to the music of J.S. Bach, Chris has conducted many staples of the choral-orchestral repertoire; he has commissioned and premiered a number of new choral works in both Australia and America. He also leads two of the longest-running annual Messiah performances in America, with the Worcester Chorus and at Carnegie Hall with the Masterwork Chorus.

A committed music educator, Chris has served on the faculty of the Taft School, Sydney Grammar School, Hotchkiss Summer Portals, and Holy Cross College. He founded the Litchfield County Children’s Choir in 1990, and has conducted numerous middle and high school festival choirs in New England, New York and Australia. He presented two documentaries with SBS-TV, an Australian national public television network, and has given several presentations at conferences for American Choral Directors Association and Australian National Kodàly Association. Chris has been a guest conductor at Emmanuel Church in Boston, a church renowned for its four-decade Bach cantata project.  He currently serves as Music Director of St John’s Episcopal Church in Stamford, Connecticut. He led the Dessoff Choir in New York City from 2010 to 2016.

A pianist and keyboard continuist, Chris holds degrees from the Hartt School and the Yale School of Music, where he studied choral conducting with Marguerite Brooks, and the University of Sydney. He researched the performance history of Bach’s B Minor Mass in New York City for his PhD in Musicology; his dissertation won the American Choral Directors Association’s 2012 Julius Herford Prize for outstanding doctoral thesis in choral music.

One of New England’s principal choral conductors, Richard Coffey established CONCORA as the region’s first professional choral ensemble in 1974. Serving as Artistic Director for 40 seasons, he stepped down in 2014.  In 2017, Mr. Coffey concluded a distinguished 45-year tenure as Organist and Minister of Music at South Church in New Britain, where he conducted a choir of professional and amateur singers and served as Artistic Director of its Music Series, which annually presents concerts by visiting artists. He has been Music Director of the Hartford Chorale since 2005.
​
In frequent demand as a chorus master, Mr. Coffey has prepared choruses for many orchestras and festivals, including the Hartford Symphony, Orchestra New England, the Springfield Symphony, the New Britain Symphony, the Waterbury Symphony, the Bard Music Festival, and the Harkness Summer Music Festival. For five seasons, Mr. Coffey was chorus master of the Connecticut Opera Association.

Mr. Coffey has served on the boards of directors of the New Britain Symphony, the Hartford Chapter, American Guild of Organists, and Chorus America, the Washington, DC-based national choral service organization. He also serves regionally as adjudicator and clinician for keyboard and choral competitions and festivals. He served for five years on a panel of advisors to the Institute of Sacred Music at Yale University.
​
Mr. Coffey often makes presentations at regional and national conventions of the American Choral Directors Association, Chorus America, and the American Guild of Organists, and writes reviews for The Choral Journal.

Mr. Coffey holds degrees in music from the University of North Carolina at Greensboro and the School of Sacred Music of New York’s Union Theological Seminary. He was awarded France’s “premier prix” in organ performance following studies with organist Marie-Claire Alain. In 1992 Mr. Coffey was named Choral Director of the Year by the Connecticut Chapter of the American Choral Directors Association. In 2007 he was awarded the Lifetime Achievement Award by the Greater New Britain Arts Alliance and a Major Achievement Award by the Hartford Symphony Orchestra, in recognition of outstanding and inspiring artistic leadership.

Mr. Coffey is the 2009 recipient of the Alfred Nash Patterson Lifetime Achievement Award, presented annually by Choral Arts New England to individuals who have made exceptional contributions to choral singing and its culture within New England.